I wanted to update my website today, adding upcoming projects that I had in mind for next year. Some of the dates have not been determined, but I will have cover art and book trailers available with them within the next few months. I just wanted to finish up Wicked Magic before I got started on one of those projects.

I hope to have Wicked Magic done and edited by the end of the month so that I can publish it by next month so stay tuned.
Posted by Sandra Madera at 1:55 PM No comments:

So, I wanted to talk about different terms I heard from period movies, depicting the Regency and Victorian era. I have heard a lot of terms that would seem incorrect for this time, but were actually quite common for that age and region. I have had people tell me when they read Restraint that there was a peculiar phrase, but actually things were just said differently in that time.

For example, in England, it is common to use the word "sterling." In America, we don't use that word unless something is made of sterling silver. However, sterling means brilliant. So, it is not uncommon to hear someone say: "That is sterling!" or "Sterling job!" or simply "Sterling!" Sterling can be interchangeable with brilliant. So, someone could say "Brilliant job!" While in America, we stick to just saying: "Good job!" or "Excellent work!"

Another example is the word "around." In the past, it was not uncommon for people to take a "turn about" the room. It simply means to walk around, but the word "around" was not used. About was a much more common word and there were times it was used in its stead (get it, instead). "Don't look about mindlessly."

Yet another example is when it is said someone "spoke out of turn." That is speaking without the liberty to do so especially in heated situations. Back then, women were rarely allowed to voice their feelings. Women were the property of men and so women were bound to the men they were married to. Men didn't look to women for advice. Women depended on men for everything. This is something that seems foreign today.

These terms or phases can seem odd to us in America, but can be quite common to those across the pond who embrace their history. Remember that in European countries, it is not uncommon to find a manor that dates back to the fifteenth or sixteenth century. They have thousands of years of history. Their history is that rich. I have friends that were born in countries that were ruled by the British or were actually born in Britain. One thing they all have in common... they have a love of history. They watch BBC classic movies, which are based on literary classics, all the time.

In America, our history is not that lengthy. There are buildings that are over a hundred years old, but as far as nations go, we are still relatively young. America declared its independence in 1776 and George Washington became America's first president in 1789 as a member of the Federalist Party. Settlers such as the Pilgrims first journeyed here in 1620. That is about 392 years of documented history. Before that, our history is a mystery. Yes, they have found bones of explorers that predate known settlements, but our history has been lost to us.

I was watching Pride and Prejudice starring Keira Knightly the other day. It is one of my favorite movies. As I watched it, I remembered how I struggled to understand what was being said when I first viewed it. Yes, I understood the movie, but there were weird phrases that I didn't particularly understand. To me, it was like going to the opera. Watching it, you can understand what is going on although everything is said in Italian. Well, watching something from another era is like that for me. I can appreciate it, but I have to watch it over and over to truly understand its complexities.

So, I say... read things that are not common. Don't just move forward without understanding what is truly being said. Take the time to look it up and find out what the author means when they write something that seems odd at first. In literature, it is important to look beneath what is being said to truly understand.
Posted by Sandra Madera at 7:48 AM No comments: 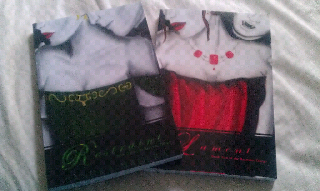 Received my soft covers in the mail today. Overall I am please with the look. I plan to publish Wicked Magic and the original Willow stories in the same fashion soon. I have all the cover art and the back cover blurbs done.

If you don't have a copy, pick up yours for about $7.00 at BarnesandNoble.com.

I have been writing like crazy, but I still have about nine more chapters to write for Wicked Magic. Already wrote 2000 words today. I expected this novel to be about 60,000 words, but it may be closer to 70,000.
It will be a crazy but great ride that I hope the fans of the story will enjoy!

Posted by Sandra Madera at 3:17 PM No comments: