Malcontent is the third and final extension of the Restraint Trilogy. This will be about Louise May Reynolds and her family. It will also showcase how she fell in love with William Carter, bringing the story around full circle. I just finished writing the blurb and added it to my website. I will be adding the video trailer soon. As well as the bookmark and wallpaper images. I hope to have this novel out by December 2012. I am hoping for earlier, but one never knows what life will throw at them. 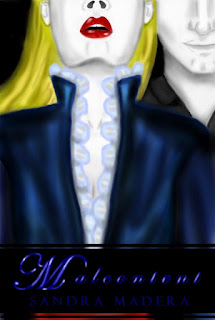 Raised in a world where the first born are often sacrificed, Louise May Reynolds believes it is her destiny to appease her family by entering into an arranged marriage. However, Louise May struggles as she finds marrying Bryan Froster, a powerful and ruthless vampire prince, revolting.

In her discontent, she tries to devise a way out of the union, fearing the only way to truly be free of Bryan Froster is death. Scared of turning her back on her family and the clan, Louise May struggles inwardly between what others expect of her and what she wants for herself. Until, she rebels against everything she has been raised to believe. Secretly vowing to escape a life of servitude, she risks disturbing the balance between vampire and servant which can cost her more than she can even imagine.

Can Louise May turn her back on her family in order to follow her heart?
Posted by Sandra Madera at 8:51 AM